When Ruth Ann Fisher first moved to Coronado in the early ‘80s, the island was another stop in the up-and-move life of a military spouse. She and her husband, Mike, spent only nine months here before moving on to their next destination. 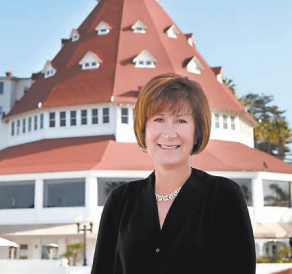 In 1999, nearly two decades and roughly a dozen moves later, the Fishers–now with two kids–found themselves back in Coronado. This time, they expected to stay 18 months.

After falling in love with everything the island offers, the Fishers extended their stay in Coronado another three years while Mike worked with the Naval Special Warfare Center at Naval Amphibious Base Coronado. Mike was then faced with a two-year deployment that would have caused him to miss their son’s junior and senior years of high school, to which he retired from the Navy and secured a position that would allow the Fisher family to make Coronado their permanent home. Ruth Ann established Del Coronado Realty shortly after and has been happily helping others find their “forever home” in Coronado ever since.

Even during her temporary stint in Coronado, Ruth Ann felt the island’s small town charm.

“It’s a tight-knit community, right across the bridge from a big city,” Ruth Ann says. “You have instant accessibility to the endless attractions in San Diego, with a warm, welcoming, and laid-back neighborhood to come home to.”

Do you prefer mountains or beaches? Surfing or snowboarding? Biking or boating?

All of the above are within reach, from the pristine shoreline right in our backyard to the adventures that await just a two-and-a-half-hour drive away in Big Bear Lake.

“And the outdoors aren’t just seasonal,” Ruth Ann adds. “You can get outside and be active year-round.”

“When you’re a parent, education is everything,” Ruth Ann says. “The Coronado Unified School District is truly extraordinary, and the island is extremely safe for kids going to and from school.”

The combination of award-winning schools and low crime was pivotal in the Fishers’ decision to stay and settle down in Coronado. Both of their children attended school here from a young age through high school graduation.

For those who find themselves drawn to the many allures of Coronado, there is no better place to begin exploring the real estate market here on the island than with Del Coronado Realty. Led by Ruth Ann’s decades of local market knowledge and genuine passion for the local community, our team is here to help you not only find a home, but create the life you envision in Coronado.

“True to the Coronado spirit, we take pride in keeping strong ties,” Ruth Ann says. “Our clients are not transactions. They are our neighbors.”