Hotel del Coronado starts $200M upgrade, its biggest ever. Does it need it? 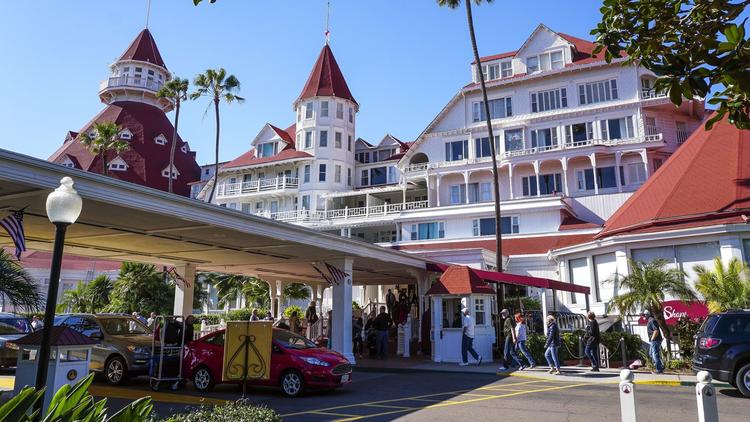 For decades, the stately Hotel del Coronado, with its imposing red-roofed turret, chandelier-bedecked Victorian lobby and its storied ties to Hollywood nobility, has been instantly recognizable well beyond San Diego County.

Yet what has long been lacking is an equally recognizable entryway befitting the grandeur of the more than century-old icon.

That omission will be no more after the Coronado resort undergoes over the next few years a $200 million redevelopment and expansion, which is easily the most costly upgrade since the hotel opened in 1888. As a comparison, it’s almost triple the cost of the 78 luxury beachside cottages and villas that opened in 2007, and it far exceeds the addition of more than 300 hotel rooms in the 1970s.

The milestone project also marks the final build-out of the 28-acre resort, which will not only be getting a new palm tree-lined entry, but also a 25,000-square-foot conference center and great lawn, two parking garages, 142 more guestrooms, a new signature restaurant, a major transformation of 97 California Cabana rooms, and a redo of the popular ocean-view sun deck.

Walking the grounds, it’s hard not to notice that parts of the resort have turned into a construction zone, with the roar of jackhammers and bulldozers piercing the quiet of the coastal retreat.

“The Del is 130 years old and it’s gone through upgrades over that period as every hotel does but what this master plan will do is keep the Del alive for another 130 years,” says hotel general manager Harold Rapoza Jr.

He is especially excited about plans for the new entryway, acknowledging that the current route for accessing the hotel’s main entrance — a nondescript roadway off Orange Avenue — is not only somewhat confusing to visitors but also “underwhelming.”

“We are going to close that area off and instead you’ll continue down to Avenida del Sol, make a right turn and come up a much more grand entrance with the money shot of the Del in front of you,” Rapoza added.

As much as successive renovations of the resort have always incorporated the kind of creature comforts one would expect of any contemporary hotel, this latest project is also a nod to the hotel’s rich history.

For instance, the original front porch, gradually covered over in decades past, will be entirely recreated, down to the separate set of stairs that years ago were reserved exclusively for lady visitors.

The hotel porch of yesteryear is not hard to miss in the 1959 film “Some Like it Hot,” which in one scene features several gentlemen sitting on the veranda quietly reading their papers. They suddenly come to life and quickly turn their heads as Marilyn Monroe’s character walks up the steps to the hotel.

Many of the coming changes to the Hotel Del shouldn’t come as a complete surprise because most of the improvements have long been envisioned in the resort’s master plan, first approved by the city of Coronado in 2003 and later amended in 2010. Memories may be short, though, given the considerable time that has passed since the California Coastal Commission’s approval nearly a decade ago.

An earlier slowdown in the tourism economy was in part responsible for the delay, and changes in the ownership structure over the past years also affected the timing of the project. Although the current owner, the Blackstone Group, has had an ownership interest since 2005, it hasn’t always been in a majority position.

In 2011, Blackstone came to the rescue when the Coronado hotel was at risk of going into default on more than $600 million in loans and invested $100 million in the property. Five years later, it was prepared to sell the hotel to a Beijing-based firm as part of a larger portfolio transaction but the Hotel Del was pulled from the portfolio after a Treasury Department committee was said to have had concerns about its proximity to the Coronado Naval Base.

“The main reason we’re doing this now is because it’s time to do it,” Rapoza said. “In general, we should see a big lift in our room rates when we get done with our guestrooms. Outside of Beach Village, the cabanas will be the premier rooms in the resort after they’re renovated, giving us a 20 percent to 30 percent lift in our room rates.”

The Hotel Del is also in the enviable position of being a coastal property that still has enough land left to add a sizable number of rooms and meeting space, even at a time when the pace of growth in the hotel industry is expected to slow.

“This is in Coronado, where it’s extremely difficult to get approvals for anything so the value of being able to add more rooms to that is incredible,” said Alan Reay, president of the Orange County-based Atlas Hospitality Group. “I don’t know of any other hotel on the California coast with that amount of rooms and meeting facilities so it’s very difficult to go wrong with adding the rooms they’re adding.

“It’s like it’s own little demand generator, which makes it very, very unique.”

Here is a preview of the changes coming to the Hotel Del Coronado:

North parking garage: Now under construction, the nearly 800-space structure will consist of two levels of underground parking, plus surface parking. Located near the intersection of Orange Avenue and R.H. Dana Place, the garage will occupy what had been a 236-space lot. Once all the development is completed, the number of parking spaces will grow from 943 to 1,179. 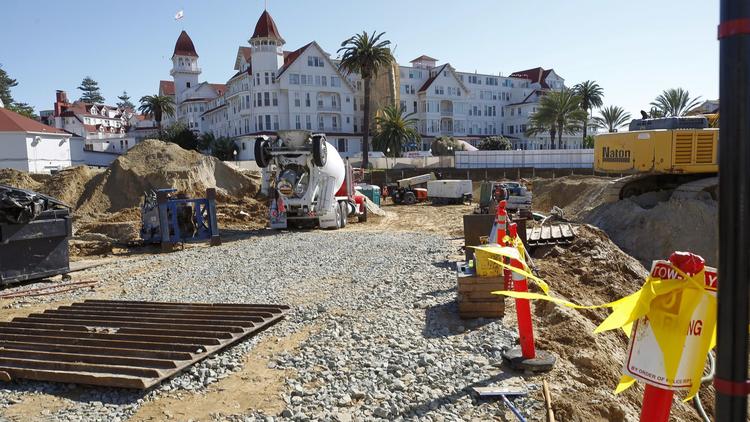 Vista Walk: Also currently under construction, this is a revamp of the existing outdoor event space. It replaces what had been a two-level event area that Rapoza describes as more of a hodgepodge. The new space, located near the ballroom, will be larger, all on one level and will offer views to the ocean and the hotel’s historic turret. It should be finished by May. 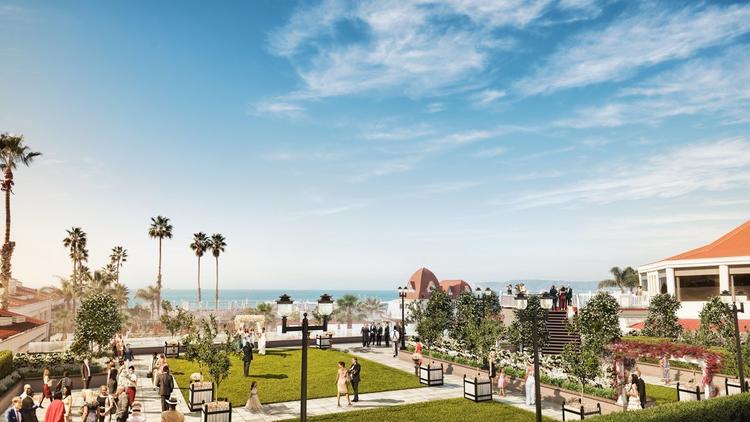 There was nothing intrinsically wrong with 1500 Ocean, says Clique founder Andy Masi, but the hotel needed a new dining venue that is more in keeping with San Diego’s evolving food scene.

“I really looked at what is the direction restaurants are moving in, and what can we deliver to the tourists and how do you get locals to drive over the bridge to visit a great restaurant,” said Masi, whose firm has helped develop a number of nightlife venues in Vegas.

For Serēa, the menu will be Mediterranean-inspired and will capitalize on locally caught seafood. Masi describes the look of the 180-seat indoor-outdoor restaurantas reminiscent of a “really great beach house where you feel like you’re dining at someone’s home or on their patio.” It is expected to open by early summer.

While Serea will be the biggest dining change, food and beverage revamps are planned throughout the hotel, says Rapoza. The management team is still weighing changes for Sheerwater, the hotel’s three-meal-a-day restaurant. One possible idea is converting it to a steakhouse. It will also get a name change. Work on that venue, though, wouldn’t start until next year.

Another planned change is to relocate the hotel’s grab-and-go outlet next to its Eno Pizzeria and Wine Bar and create more of an Italian marketplace offering upscale to-go prepared foods, Rapoza said.

“This all goes back to the master plan development,” he explained. “We didn’t want to have this new development, and then the food and beverage hasn’t been touched. We wanted to bring excitement to all parts of the resort.”

Main entry/porch: Starting next year, work will begin on the new entryway, creating a clear sense of arrival for guests. It will be lined with palm trees, and the surface will be composed of decorative pavers. As vehicles approach the main entrance, they will go around a landscaped circle that will be used for both entering and exiting the property. A signal will be installed at Avenida del Sol that will help made left-hand turns onto Orange Avenue easier and safer.

Once completed, the entryway will mark a return to its original location where hotel guests in the early years would arrive by train. The hotel believes that the earlier alignment was relocated to its current location sometime in the 1960s. Also next year, the original veranda that ran across the front facade, from the ballroom to the Crown Room, will be recreated.

New conference center and condo hotel rooms: This project, expected to get under way next year, will deliver nearly 40,000 square feet of additional indoor and outdoor meeting space, plus 142 more rooms contained in 75 one-, two- and three-bedroom units located largely in two wings off of the conference center. One level of underground parking with 280 spaces is planned below the center.

Like the Beach Village cottages and villas, the new lodging will be sold as condos with limited-use restrictions for the owners. While sales prices have not yet been determined, current listings for some Beach Village cottages offer perspective on potential prices. They range from $3.9 million to $4.3 million, and a Beach Village villa sold last year for more than $2.8 million or $2,306 per square foot.

Cabanas remodel: The 1970s-era building will get a complete overhaul, with special attention to creating more of an indoor-outdoor feel, particularly along the beachfront. The lower level cabanas will have large patios with chaise lounges and fire pits. The bathrooms will also be entirely renovated. Completion is expected by next summer.

Sun Deck with stadium-style seating: Targeted for completion by next summer, this planned upgrade will for the first time connect the beachfront Sun Deck Grill to the pool below via what Rapoza describes as a stadium or tiered seating. The project will also incorporate a larger, two-level kitchen capable of serving guests seated around the pool, as well as the Sun Deck restaurant. The result will be a 600-seat dining venue that includes both levels.

Historic preservation: Some of the resort’s historic structures dating to the late 1800s and early 1900s, like the Ice House, Laundry Building and Power Plant, are undergoing various degrees of restoration or renovation. The Ice House will be re-purposed as a “history gallery” that will showcase all the hotel’s historic images curated over the years. It is possible that the revamped Ice House could be open to the public as early as the end of this year.